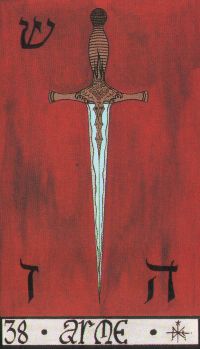 Weapon is a negative card and it can symbolize extreme violence, uncontrolled passion, evil and conflict.

Red is associated with Mars, the planet of war. A weapon can, however, also be used in self-defense.

Personality: A person that goes through internal conflicts and that has problems with authority figures, especially with the father. The person is tough, looking for violence and conflict.

Love and relationships: The relationship goes through endless conflicts and a separation is probably the best solution.

Profession and work situation: The card Weapon is about lawyers and military occupations. Otherwise and in general the card indicates hierarchical conflicts.

Personal or spiritual development: Atheism, and difficulties in finding back to spirituality.

Crime reading: Attack; weapon; gun; in the 4th house – family attacked. Weapon and Science: trauma to the head, or attack at the head, but can also indicate that there is evidence of the weapon used in an attack or murder.

Weapon in combination with other cards: