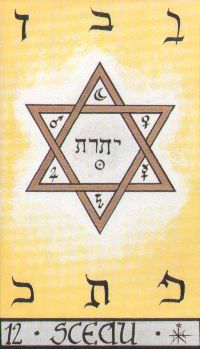 The six-pointed star, Solomon's seal, is a Hebrew symbol.

The bright yellow background symbolizes the divine power but is also associated with royal power.

The figure in the picture consists of two interlaced equilateral triangles, and they symbolize the union of the male and the female principle. Hebrew letters are used to write "God" in the figure in the middle.

Personality: The seals usually represent a person with fair hair, attractive, and people seem to notice this person. The person has certain magnetism. Often this person has an important position of power and authority. The person loves to surround themselves with other people because they don’t like solitude.

Love: The card usually means a sincere and close relationship. If a new relationship has started, it will deepen and only get better. On the other hand, the card can also symbolize the doubts we feel when other people are present and give us lots of attention.

Money: The card is associated with a well-run economy, material conditions without worries.

Profession and work situation: The card is associated with large companies, businesses in general, trade and construction; notaries and real estate also belong to the interpretation of this card. The card means that the employment situation is thriving, and you are starting new projects. Group work is to be preferred before working alone. Group work leads to success and working alone prevents success.

Personal or spiritual development: The card symbolizes an insider who has reached an important position and ability to listen to others.

Seal in combination with other cards: