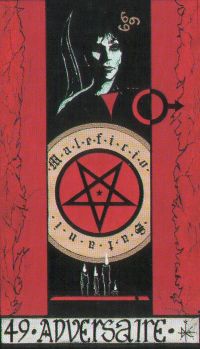 The most negative card of the deck. The card is associated with the opposite of light, and everything that is considered good.

Even in combination with positive cards, Opponent tends to spread its negative energy.

The card is associated with devilish, dark, evil forces on earth and in the universe. Evil hides in the darkness and the satanic elements are expressed by the number 666 in the reversed pentagram, as well as in the words Maleficiu and Satani.

The card represents black magic, witchcraft, Satanism, evil. The message of the card is that man's task is to avoid the temptation to fall victim to dark energies.

Personality: Opponent is an evil person with a questionable morality. A violent aggressive person. The person is often unbalanced, perverted, and likes the occult, even if the intentions are not always bad.

Love and relationships: The card symbolizes rivalry, chaotic emotions, passion that can create destruction in the life of a person. A relationship could end at any time.

Money: Risk of bankruptcy. Only a miracle can help the questioner.

Profession and work situation: Could mean loss of job or important enemies at work.

Personal or spiritual development: Spirituality is not the goal and is not what really interests the person. He or she prefers unhealthy practices. An evil ideological influence can lead to mental imbalance.

Opponent in combination with other cards:

2 Isolation: Depression and morbid thoughts. Captured by the enemy.
3 Delta: Worries disappear.
4 Lie: Someone is trying to manipulate you.
8 Nadir: Danger and occult practices. Deep dangerous hate and anger.
10 Success: You manage to resist.
11 Temptation: Betrayal
12 Seal: Dubious contracts.
13 Penance: Total submission.
14 Man: A man betrays you.
15 Love: Emotional conflict.
17 Energy: Someone who hates you wants to hurt you.
18 Science: Interest in magic.
19 Prayer: Possibly death?
21 Blessing: The enemy is destabilized.
22. Choice: Jealous because the partner is seeing other people.
25 Woman: Problems with a woman
26 Ordeal: Conflict of interest when it comes to work, or loss of job.
32 Illusion: The cause of the problems is another, and not the one you think.
33 Birth: Difficult childbirth.
37 Light: Favorable change.
38 Weapon: Disputes, quarrels or threat of aggression.
40 Suffering: Total ruin.
41 Justice: Health problems
46 Sacrifice: Negative ideological influences.
47 Eternity: Difficulties will vanish
51 Return: Regression.
53 Meditation: You think too much about your problems.
55 Fusion: A union or a relationship will fail.
56 Brother: Friends let you down.
57 Omega: End of a number of problems.