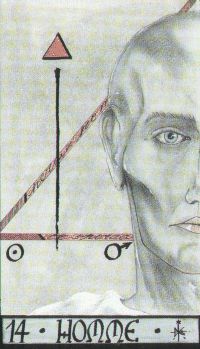 The symbolic purpose in only seeing the right half of the male face, the active masculine principle, is that a man can never become whole without the female principle.

The man’s shaved head just like monks in various belief systems, is a sign of submission and obedience. The triangle, the symbol of fire, just like the symbol of the Sun and of planet Mars, are associated with the active male principle.

The black line symbolizes free will, important for choosing one’s course in life. The half of the triangle that continues behind the face is the call for the second half – the card number 25, Woman.

The card Man usually represents an influential man, someone important, but it could represent also men in general or masculinity.

Personality: The card represents of course a male individual, a man. He is passionate and sympathetic. He has a certain moral force, has good judgment, tact, and tone. If the cards around are negative, the card represents an egocentric, arrogant, angry, and violent person.

Love and relationships: The card represent an important man in someone’s life. The bond between you will be strengthened if it is already there. The concretization of a relationship, a future encounter with a man.

Money: A stable financial situation. A man can help you improve your revenue.

Profession and work situation: The man is not associated with any profession. At work, a man has a big influence or impact. Help from a man can also be obtained.

Personal or spiritual development: The person has spiritual protection. A man or a leader will initiate him to a higher plane.

Man, in combination with other cards:

11 Temptation: Gay man. It could also represent a man that should not be trusted, because he can betray you. Rivalry between men.

38 Weapon: Physical or verbal conflict with a man.